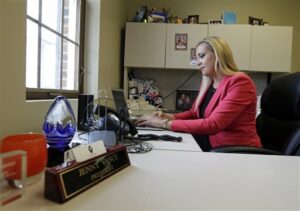 It is not always about being right. Don’t take “Your Fired” for an answer! How to take feedback, make changes and win back clients. In the fall of 2011 a major client terminated its contract with her Indianapolis-based company, LeadJen, which helps identify and arrange sales meetings for companies. The client, a West Coast-based technology firm, told Vance that it wasn’t getting the sales results that it expected. It was a tough blow, and meant a significant loss of revenue.

So Vance set out to win them back.

The contract may have ended, but the client still had appointments pending that LeadJen had set up. Vance was committed to providing the best service possible to the very end of the contract, and made sure that her staff followed up with the client’s salespeople to see how the appointments had gone, even though LeadJen wasn’t getting paid for this extra service.

“How you leave the relationship is the No. 1 thing that impacts the ability to work again,” says Vance. “We want to make sure that the client has no doubt that we worked through to the last hour.”

Vance began checking in periodically with the client’s employees, and talked to its customers to get a sense of whether the client’s business was changing, and what its needs might be. When she traveled to the West Coast she asked for a meeting with top executives. The first two times she asked, the answer was no.

The third time, the executives agreed.

Vance was anxious going into the meeting. The conversation was difficult.

“You sit there, take the feedback, fall on the sword a little bit and realize, in this situation, it’s not about me being right,” Vance says. “It’s not easy, especially if you feel strongly that you did everything you could — but that’s not what’s going to win the relationship back.”

As they talked, Vance came to understand just what had gone wrong. The client had a single staffer who was LeadJen’s main contact. But that staffer wasn’t letting Vance know when there were problems with appointments that LeadJen had set up.

“We didn’t know the sales reps were having a bad experience,” Vance says. “They were dissatisfied and we didn’t hear about it in time to make a change and make it better.”

That conversation gave Vance a chance to talk about the future as well as the past.

“We had a lot of work to do in our conversations with those key executives,” Vance says. “We had to give examples of how we would make it better.”

In early 2012, LeadJen competed all over again against other companies for a new contract with the client. It won.

In the past year Vance says her relationship with the client has grown much stronger. One of her employees has done such a great job that the client even sent her a gift — a tablet computer.