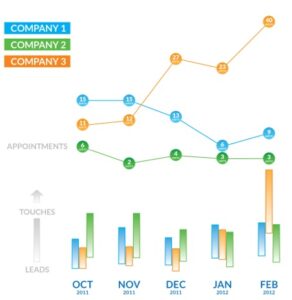 In a rush to close out the calendar year quota, sales managers often put prospecting on the back burner beginning around Thanksgiving. Their belief that most prospects are busy, on vacation or at holiday parties further justifies their inaction. Contrary to popular belief, the numbers show that prospecting in December positions a company for a top-performing January.

When put in perspective, shutting down prospecting in December doesn’t make a lot of sense. Sales managers wouldn’t dream of not prospecting during the last month of every quarter, when reps are busy closing deals to make quotas. Doing so would have sales reps sitting idle four months out of the year, and sales would suffer. What’s worse, it takes time to fire up an idle prospecting engine.

Prospecting in December positions a company for a top-performing January. Companies that continue to prospect in December start out January in a strong sales position because sales reps come back to the office after closing out the year and walk straight into meetings. On the other hand, companies that stop prospecting in December enter January with an empty pipeline. Sales reps spend January making calls and building the pipeline, and selling doesn’t start up again until February.

It’s true that December is full of distractions for prospects. At the same time, December’s cadence can actually work to your advantage when it comes to appointment setting:

Finally, companies that have decided to hold off on implementing a new sales prospecting effort until 2013 should reconsider. Waiting two months to fire up the prospecting engine equates to two lost months of sales in 2013. Companies with a long sales cycle may have to wait until 2014 to benefit from the lead generation effort. Can your company afford that?