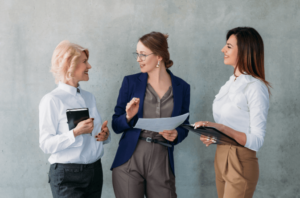 Thrifting and Sales: A Guide to Getting Cool Stuff

When asked during an interview what trend she would never want to see return, Donatella Versace simply said “Minimalism.” With the rise in popularity of Marie Kondo’s “Tidying Up”, people are donating their cool stuff to thrift stores at an unprecedented rate. For those of us oblivious to algorithmically generated trends, this means that there has never been a better time to score some sweet stuff for cheap.

Perhaps like me, you’re bougie on a budget. As a former employee of a boutique thrift store and a current sales executive, I will teach you the ways of how to negotiate the trials and tribulations of haggling at a thrift store to get the most bang for your buck.

As we will see, bartering skills go hand-in-hand with the skills that salespeople use daily.

Sourcing Where to Thrift

While finding the best places to shop is a bit different than outsourced lead generation, a similar amount of research, intuition, and care must be put into finding where the best places to shop can be found. Thrift stores are a dime a dozen, but consider the location in regards to the quality of goods they are receiving in relation to the traffic any given location is receiving.

The most popular thrift stores often get some of the coolest things, but their popularity often means that the interesting things that are coming in get picked over before you even have a chance to look at them. Conversely, you may find the occasional rare item at a low-end thrift store, but a lack of curation means that finding these things is a time-consuming process that might be worth spent elsewhere. Antique stores can often have the best curation, but the knowledge of objects worth means that their prices will be vastly higher than other locations.

The best locations are typically those on the outskirts of affluent areas with medium amounts of traffic. Donation-based, non-profit stores with a “priced to move” mentality will often get the highest quality of goods for the cheapest prices.

Most people have inflated ideas about what the value of an object is. Foremost, you should buy whatever speaks to you – the value of things is often driven by factors that are based on scarcity and trends, things that ultimately have nothing to do with your satisfaction of a given object. With this in mind, don’t buy things simply because they look expensive – old pewter diningware and silver plated sets are often a lot less valuable than you would imagine, and their dated appearance makes them undesirable for most collectors, even though they may appear to be refined.

With ceramics and glassware, pay attention to the weight, coloration, opacity, and the stamping on the bottom. If pottery is hand signed, it is often made at a local studio and probably has little worth – if the thickness is not uniform, it is an amateur piece. Strange coloration and strange shapes might signal that it is valuable. Google’s phone app has a program that is designed to analyze photos of anything taken, so this might be an invaluable resource for trying to weigh the price against its retail cost, or to see if you’ve stumbled on something actually rare.

What most people don’t know going into a thrift store is that people are often willing to negotiate on prices. Although relatively uncommon in most retail stores, haggling is how you are going to get the best deals on pieces, particularly things that might be in glass cases or placed in the window of the store. Ultimately, haggling takes practice, and means being knowledgeable about the worth of the piece you are looking to buy, giving realistic offers, and respecting the person you are buying from.

Thrift store employees are salespeople looking to sell the things in their store. It is a bit like getting past the gatekeeper of effortless coolness, except these people are looking to hit a quota by the end of the day and want you to buy the things in their store even if they appear disaffected. When you see something you like, express interest in it, examine it, try it on.

Ideally, you should let them indicate to you that they would be able to negotiate on the price, but if not, ask them, “Would you be willing to go any lower on this?” I would suggest naming a price before they do: because most people don’t know how to haggle, they will often only lower the price a fractional amount as opposed to the true savings that you might be able to get (aiming to get around 30% off an object is a good frame to work around – dip below this at first to get them to work back up to this number, but never suggest anything more than 50% off, as this is typically an insultingly low number that destroys the notion of trust between you and the salesperson.)

Haggling takes a bit of grit and nerve to pull off – remember that while the goal is getting a good deal, you are dealing with people who deserve your respect. Treating a person like garbage is a great way to close the door not only to short term savings, but also getting on a store’s “bad list”. While your shopping experience may seem ephemeral, retail employees remember all the negative and weird things that happen throughout a day, and if you treat them poorly, you may earn yourself a nickname or reputation that will precede you.

Treating employees well and breaking up the monotony of their day, conversely, means that they will often give you good deals and may even keep an eye out for things that you might like if you are a regular (your own personal lead generation outsourcing, if you will).

Thrifting is a fun way to waste your money, but it is also an industry of our relationship to things, and the worth that we see in them. The value of an object is largely based around the perceptions people have around them, rather than being a truly fixed amount. Getting the best prices for the coolest things means building relationships with people and knowing what you want.

How to Overcome Objections in Sales

Let’s face it—most sales reps have dealt with their fair share of objections. From…

What is Full Funnel Optimization in Sales?

MQLs vs. SQLs and the Roles They Play in the Sales Process

In a sales person’s ideal world, all potential leads would be ready to close…