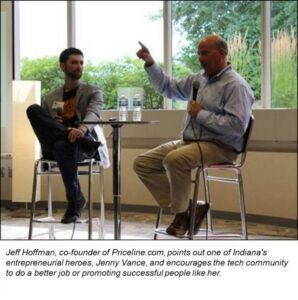 Priceline.com Cofounder’s Challenge for Indiana: “You need to promote your heroes.” Jeff Hoffman didn’t mince words when asked what he likes about Indiana. He likes our work ethic and says it sets us apart from the coasts, and that technologists here in Indiana are just as smart as people anywhere else.

He thinks Indianapolis and Indiana are under marketed because there is plenty of talent here with significant advantages. He told the crowd at TechPoint’s Entrepreneur Bootcamp presented by Ice Miller that we need to adopt an attitude of success, and celebrate the wins we already have in bigger, more spectacular ways. “You need to promote your heroes,” Hoffman said.

Hoffman didn’t have to look far to point out the kind of hero he meant. Standing at the back of the room was Jenny Vance, president of LeadJen, the sales lead generation and business intelligence company she founded almost 10 years ago. Vance just finished filming the documentary series VentureCamp, (one of Hoffman’s creations) that brings 12 highly creative and skilled entrepreneurs together to build and launch businesses. The very first VentureCamp took place in Indianapolis and Vance’s concept PlanSoon emerged as one of the winners.

Hoffman said that we as a community need to “highlight rock stars” like Jenny Vance because she can be such a big inspiration for the next generation of startups. He said when young people see Vance and other wildly successful entrepreneurs do what they do right here in Indiana, they think, “I can grow up to be her.”

Promoting successes was a dominant theme during Hoffman’s live interview with TechPoint President and CEO Mike Langellier. That’s a deficiency we need to rectify — we need to do a better job of promoting successes and inspiring people in college who think they have to leave Indiana to have meaningful careers in technology.

The good news is that TechPoint is embarking on two different major initiatives that will have an enormous impact on promoting our successes and heroes.

The first one is this powerful new blog platform developed in conjunction with Compendium. This fall, the temporary blog you now see will be replaced by something really special that will ensure that TechPoint is the voice of Indiana’s tech sector — shouting over the rooftops of the world about our successes and heroes.

The second initiative is a very ambitious talent recruitment effort that targets current students, recent graduates, and 24-40 year old Indiana expatriates on the coasts and other areas with messaging and opportunities to stay and/or return to Indiana and join our thriving and vibrant tech community. More information about this effort, which TechPoint is calling IndyX Initiative, will be available in the coming weeks.