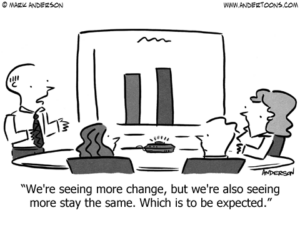 The Sales Funnel Metric You Need To Be Looking At With the start of a new year comes new goals, new offerings, and new quotas. Most of the time it feels like a fresh start, but it can get stressful when we start crunching the numbers to see what it will take to get it all done.  For a lot of sales teams this means diving into their sales funnel and identifying where changes need to be made. For those with long sales cycles – even the smallest changes can seem daunting.  A/B testing is a great way to help analyze a change in your prospecting process, but many are left with the question: when do I actually start making adjustments to increase the effectiveness of my campaign?

For those who have a longer sales cycle, there are typically feelings of increased anxiety. It’s difficult to know prospects’ next move when budget, pain, and need can’t be predicted. Our end game is to always uncover how many qualified leads it truly takes to get a closed-won deal – but we can’t wait on a 12-18 month process in order to make important campaign level decisions. We have to strategically make changes to campaigns while prospects are in the middle of the funnel. But how?

Traditionally, outbound marketing strategy focuses on making as many dials, to as many people, in order to reach the maximum number of conversations, and set the most appointments possible. A lead response rate metric is used to measure the results and can be helpful in understanding the best performing industry, title path, or time of the day to call. We have found that this can be much more limiting in campaign decision making because the more prospects we target, the more watered down the number becomes.  So if we aren’t going to look at lead response rate, what should be the focus? The concept of Math of Sales allows us to zero in on exactly how many conversations it takes to schedule a qualified meeting, which gives us a better idea of campaign performance, as well as which segments enable the least amount of activity.

Lets put this into perspective: At LeadJen, we have a client that wants to target accounts using two different ERP solutions: Quickbooks Enterprise and Netsuite.

One would be leery to make any change at all, and would be inclined to collect more data; so we keep moving forward. But now let’s look at Math of Sales.

These numbers really start to put things into perspective as to which campaigns are yielding results in the most productive way possible.  From this chart we can see that it takes 7 times the amount of touches to get one Netsuite appointment over Quickbooks Enterprise, which means that appointment is also 7 times the cost. Diving even deeper, we can take a look at what we have the most control over when making outbound dials: The conversation.  Based on these numbers, it takes 9 times the amount of conversations to set that Netsuite appointment over Quickbooks Enterprise.  These numbers tell us that we need to change the way we are talking with prospects who are using Netsuite.

Working with the Math of Sales is not only helpful when looking at campaign performance, but also team performance. I encourage you to examine these numbers for individual team members to calculate their productivity. It is a great way to not only understand how a campaign is performing while it’s running, but also make strategic changes before reaching the end.  We are able to make wiser decisions and change the campaign strategy at a time that makes the most sense during the program.   Waiting for results creates anxiety for most marketers, but with the Math of Sales, we get real time insight on our campaign performance.